After a time of silence, I come back to this blog to explain one of the most fundamental concepts with completely different visions between astronomers and engineers: the time. One might think that measuring time is a simple thing, you only have to keep adding seconds and everything is solved. If that was the case, why last December 31, 2016, had an extra second? In this post, I explain some of the existing time scales and one of the more deeply disconcerting time concepts: the leap second.

Even, so far, no additional leap seconds have been introduced since this post was written, it has been clarified everywhere that this post refers to the leap second introduced in December 31, 2016.

Everybody is used to work with dates. We are used to talk about years, months, days, hours, minutes, seconds,… The tricky thing is the concept behind these values. In daily life, that is rather irrelevant. We all know that a day has 24 hours and an hour has 60 minutes. A minute has, in most cases, 60 seconds. Therefore, a day has 86400 seconds. One could correctly say that the time that our clocks tell (including our computers) is the official time of our country. It is well known that different countries have different times. The different time zones are usually represented in a world map like the following one: 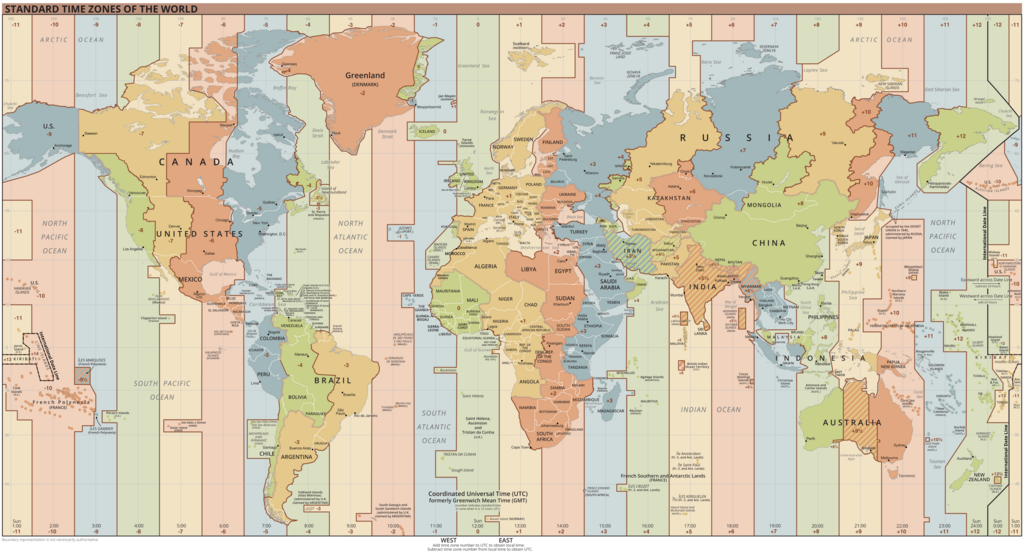 According to the map above, when for example its 1 p.m at Barcelona, it can be 7 a.m at New York. Therefore, when you travel from Barcelona to New York, you have to change the time of your watch. The reason behind these time zones is not so clear.

Video showing how different Earth zones have different orientations with respect to the Sun, placed towards the left of the video. Video made with Celestia.

Historically, the time when the Sun is at its highest point has been called 12 at noon. Since different places on Earth have a slightly different orientation with respect to the Sun, the time of each point on Earth has to be necessarily different. On the contrary, you could have the Sun rising at 8 p.m. or setting at 10 a.m.

The different time zones are just an annoyance when traveling, but it is a relevant issue when communicating with people or computers placed all around the globe. In order to synchronize the timestamps of all the computers around the World, the time of one of the time zones is used. The reference time zone is, for historical reasons, the time of Greenwich (Great Britain) on winter and it is called Coordinated Universal Time (UTC). This time scale is widely adopted and the different countries define their official time from it, by adding or subtracting the different time zones and, in some countries (Great Britain included), the summer time. This way, all the places in a single country have the same time and, when going from one country to another, only the hours have to be changed (the minutes and the seconds remain the same).

Up to now, I have explained how the time of ours clocks is defined, but I have not explained how Coordinated Universal Time is determined. Ideally, UTC could be defined in a way that the Sun always needed 24 exact hours (86400 seconds) to pass twice over the same place on Earth. But Earth is not a perfect sphere, rotating totally unaware of other phenomena occurring around it. The Sun, the Moon and the tides, the defrosting of poles in summer, earthquakes and all the phenomena that imply a mass movement have some effect on the Earth orientation. Therefore, if a second had always 86400 seconds, exactly, and the length of a day changed, the duration of a second could depend on any of the different phenomena that affect Earth rotation.

When atomic clocks emerged, time could be measured in a stable way, allowing a solid definition of the second. Hence, in 1968, the second was defined as the time needed by an electron to perform 9,192,631,770 energy transitions in a cesium atom. In 1997, the definition was reviewed to clarify that the cesium atom has to be at rest. There are two aspects that I would like to remark from this definition:

The stable definition of a second, independent of external phenomena, allows the definition of a constant day, having always 86400 seconds. These new definitions led to the creation of a new time scale, the International Atomic Time (TAI). It important to remark that this definition does not depend on the Earth orientation.

In most cases, an UTC day and a TAI day have exactly the same duration: 86400 seconds. But, as mentioned above, Earth rotation is not perfectly constant. Earth is slowing down because Moon is breaking it, through tides. As time goes by, if UTC and TAI remained the same, UTC would no longer reflect the Earth orientation. Therefore, from time to time, some corrections are required to UTC to keep it up with Earth rotation.

When the time defined by the real Earth orientation (called UT1) deviates from UTC more than 0.5 seconds, an entire second is subtracted from UTC time, by introducing an extra second at midnight (on June 31 or on December 31). The last time it happened was between December 31, 2016, and January 1, 2017, by allowing that the 23:59:60 hours was a valid value.

Time difference UT1-TAI and UTC-TAI for each year. Every step in the blue line corresponds to a leap second.

Most computers base their time on UTC, but leap seconds make that it cannot be considered constant, with the day having always 86400 seconds and a minute always lasting 60 seconds. There are some moments, like December 31, 2016, when a minute lasts 61 seconds. This fact has been ignored in most software and caused several errors in the past, even in large multinationals. Some proposals to abolish the leap second have been made, by changing the definition of UTC, but a better solution could be to change the reference time of the computers, using TAI instead of UTC. But I may better talk about it in another post.

Some reasons to create a web site using Python